I happened to walk along the street for about 5 minutes before catching the bus to go home. All the streets were flooded with people and their motorbikes. If you don’t own a motorbike in this city, sometimes, you may feel a bit self-pity cos’ here, in a sense, a motorbike kinda defines who you are. You are riding a poshy motorbike? It means you’re rich (if it’s really yours) or at least got quite an amount to own such a pricey “horse”… In that definition, I’m such a miserable girl without a motorbike (I didn’t have even a bike, man!)… But…my self-esteem is still bloody high.

Somehow, I manage to go to work on time in an affordable and economical way – taking bus. Well, it was something I used to do when I was still working in Malaysia. Thank goodness, the bus station is just in front of my house. It saves me a whole lot of money, man… Let me count, it costs me about 2RM for everyday traveling back and forth. So for the entire month, it costs me only 60RM. It’s cheaper compared with riding a motorbike and burn off petrol waiting in such a horrible traffic jam.

Today, after finishing my work, I got out the office and walked along the street (excuse me, I’m continuing my first line upthere). Walking slowly, I got distracted by the surroundings. Look at the left … Turn to the right… Stare down at my legs and … head up. Suddenly, I caught a scene of a little squirrel with a blooming red tail moving very fast along the electricity cable right on top of my head. I followed the red-tailed squirrel as we both moved in the same direction. Well, I can tell, this is a very rare scene you could ever catch in such a busy and industrialized city. I guess the squirrel just escaped from some street wild-animal vendors and quickly hid itself into the trees and now running to look for some food. It’s cute. It’s really cute…

I stopped when the squirrel stopped in front of a tree branch with full of yellow ripe cherries. It started plucking the cherries and stuffed its starving mouth. Well, what came next was that the squirrel began to litter around with all the cherry seeds after munching all the harvested cherries. Seeds flew everywhere and one almost got onto my head. Stupid squirrel!!!

I found myself smiling while observing the squirrel munching the cherries. It was so cute!!! The busy street with the squirrel up on the tree (sounds odd) turned to be peaceful and sweet (except all the dusts and fume from the endless movements of all the two-wheel or four-wheel vehicles on the tolerating streets) to me … Yes, only to me.

Sometimes I’m glad that I’m taking bus to work and back home because I can just witness something marvellous in such a natural way. You wouldn’t be able to do it if you are busy controlling your poshy motorbike. You dare to stop suddenly? You will get crashed by just another motorbike together with a humiliating series of lecture… “Watch your way idiot! Are you blind or something? If you wanna die, go somewhere and die, don’t just make me become a criminal for hitting your stupid bike…. Blah blah blah….!!”

Yes, life is sometimes cruel and cold in one way or another….

And the squirrel got what it wished… 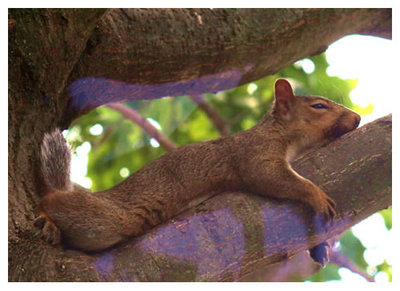