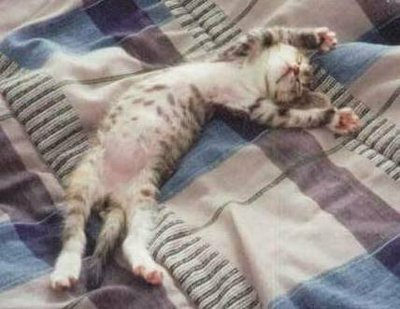 Don’t you just wonder that I’ve ever fallen in love?

This is the first time ever in my life, I fell asleep in the …. cinema!!!

Guess what movie I’ve watched? “The banquet”   with Zhang Zi Yi and
Daniel Wu.  The movie was good in a sense of special effects (with all
the kungfu hustles and flyings…that you usually see in HongKong
movies about the heroes securing the beauty (either from the beast or
from another so-called hero) or snatching some sort of top-secret
scroll about Higher-than-top Kungfu hustles (sigh… how tiring it
is!).

The movie was also good in music. Evidence? I’ve fallen asleep nicely
when the soundtracks were on.  The stupidest sence I’ve ever watched
was these mask-wearing dancers dressed up in mysterious white still
dancing madly while the black-dressed assasins flew around and slayed
them to death.

The question in my mind was “If you’re about to be killed, what are you gonna do?”.

1. Beg them not to kill you? No chance, dear, those bloody assasins
won’t have any mercy or won’t skip any chance to slay you as they’ll be
dead meat if they don’t.

2. Scream for help? Here, let me remind you that you’re in such a
lushgreen jungle which is isolated with the surrounding human world.
Scream? Nobody’s gonna hear you, darlings!!!

3. Dancing around and get killed just easily? Oh yeah, you should be
crazy, I’m 100% sure. So my conclusion was that those dancers are nuts
while they were doing just as described. Either dancing to die is
glorious (in their nutty perception) or they have some sort of mental
disability or disorder.

My answer for that question will only be one word : “Ruuuuunnnnnn…”
and I’ve gotta run as fast as I can even though I’m bloody aware that
those bastards in black can fly with their kungfu practise. I ain’t no
superwoman, come on!!!

Zhang Zi Yi, I’m not satisfied with her. She has not revealed the true
inner struggle of a woman who wants both love and power, who struggles
between love for the uncrowned prince and her love for the current
emperor. She couldn’t fully express the rollercoaster-like emotion of a
powerful woman who was disastrously shocked by losing her loved one,
realizing that she has forgotten who she was, suddenly knowing that she
had the strongest power in the dynasty, and becoming just so lonesome
(or lonely) and trust no one except herself.

Am I too strict on the performance of Zhang Zi Yi? I think I am.
Perhaps I’ve experienced too much of this kind of movie, thus I’ve
carried such a high expectation as this movie came out with lots and
lots of publicity and even recommendations from my friends. Personally
thinking, Zhang Zi Yi may be too young to express these kinds of
feeling because this kind of struggle is rarely found nowadays.
Complimentarily, she’s done her best in playing this role.

Daniel Wu was a little stiff in this movie. He’s still good-looking and
charming though. Daniel didn’t show enough of the numbness of pain. The
pain of losing his girl (the queen, played by Zhang Zi Yi), the pain of
losing his father (a.k.a the emperor that got assasinated by his
younger brother), the pain of not watching the innocent girl who was in
love with him died being poisoned, the pain of loneliness, the pain of
disappointment, the pain of hopelessness. Shit! There was a great deal
of pain in his character…. As a way of setting his painful life and
soul free (or it may be what the director and script writer want), he
also died in the end for trying to protect the queen and accidentally
cut himself with the poisonous knife.

That is what I hate about the movie…. Everybody died in the end. Case
close! No more pain, no more tear, no more drama. I guess the acting of
those famous young actors couldn’t keep me awake for long. I fell
asleep on and off during the show time. When I stepped out of the
theatre, I looked like a I-want-to-sleep zombie. It’s time for me to
stop watching Kungfu movies or old-time Chinese emperor-related movies.
I think I’m over-loaded with them and I don’t wanna buy my sleep in the
cinema.

It was such a great regret that I didn’t choose to watch “My super ex-girlfriend”. Gaahhhhh!!!

Mr. V., it was all your fault that I’ve fallen asleep in the cinema, by the way!!!