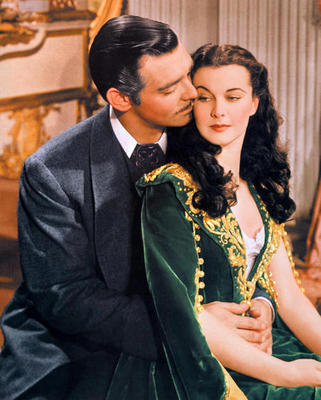 I used to love classic movies and still I do. One of my favourite classic movies of all times is “Gone with the winds”. I can watch it all over again and again without feeling a little bored about it. And it ain’t no normal movie, it’s a 3-hour movie, man. And yesterday, I had a chance to watch it again. I could see Scarlett O’Hara and Rhett Butler again. Scarlett O’Hara
is an unforgettable girl with a strong passionate heart, great optimism
and ambition for being rich and successful. Inside her, even though her
inner strength is so strong that her eyes can say so, there is still a
little girl. Here comes a very common issue that is still applicable
for us nowadays. There’s a saying that “Never take anyone for granted. Hold every person close because you may wake up one day and realize that you’ve lost a diamond while you’re busy collecting stones”.
Same goes for Scarlett. She was too busy thinking and confusing herself
with the unreal love for Ashley Whilkes while forgetting that her
husband, Captain Rhett Butler loves her that much and is willing to
give up everything for her. Margaret Mitchell has done a fantastic job
describing a rebellious woman like Scarlet who always want to break all
the barriers of the upper strata in order to live as she wishes –
to enjoy her life as a young woman, to dress up stylishly as she always
wants, to have fun, to love and above all, to make a choice for her own
life without any influence from anyone else. 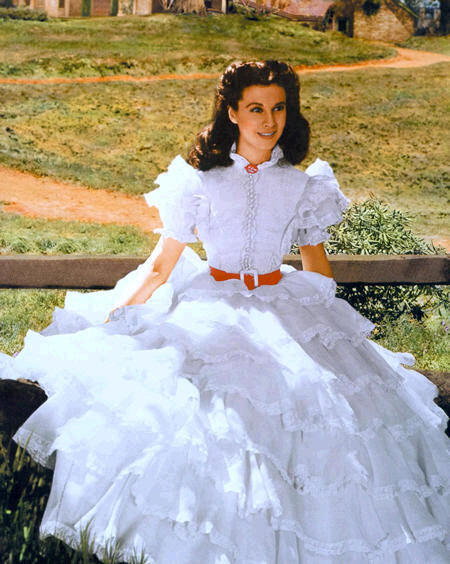 Personally
speaking, I think Scarlett represented a breakthrough for young people
at that time: rebellious, passionate and ambitious. Still, youngsters
also make mistakes and Scarlett made a lot of mistakes though. She didn’t
have a serious conception about marriage. The first marriage with
Charles Hamilton is just to take revenge on Ashley Whilkes since he
agreed to wed Melanie Hamilton – Charles’s
younger sister. But then, Scarlett quickly realized that marrying
Charles was a huge mistake right on the first night of her marriage and
she cried badly for not thinking about her mom’s
protest. Understandably, Scarlett was just 16 to make that choice. She
was too young, too proud about her beauty and attractiveness.
Furthermore, her love offered and shown to Ashley was declined politely
and that hurt even more. Her mind at that time was just full of feud,
shames and intention of revenge. I guess the calm and tolerant
character of her mother didn’t have any impact on her in this matter. Another big lesson learnt, hurting people especially for revenge doesn’t offer any good feeling after all and it just returns to attack us instead.

The second marriage with Frank Kennedy was also another big mistake that led to Frank’s
death afterward. Scarlett, this time (has been a little bit more
experienced and mature) really regretted marrying Frank as she thought
she herself has caused Frank’s
death after her accident over the bridge when she alone visited her
wood processing factory. Everything she wanted to make up for Frank was
just too late by then. He was deep inside the green grave. And in her
most critical moments when she felt stuck between the stupid rituals of
the widow and the desire of returning to her funky life, Rhett Butler
appeared to rescue her by proposing her to the ridiculously giant
diamond ring. And well, this is what all the girls can dream of, get
married with a huge diamond ring. But for the poor ladies tied with
upper education at that time, they’d rather choose to look down on diamond rings than quickly grabbing it and “muack muack”
non-stop (they want it badly though). So Scarlett got it all with her
strong will of living happily in wealth with a handsome and fun-loving
husband like Butler.

But
the fact that 2 complicated people living together in a simple marriage
will always get to be problematic. Like Scarlett, she has everything
she wants –
a fabulous wardrobe which got updated all the times, a great house with
funny glamorous decorations and furniture, a growing business inherited
from Frank, funky parties whenever she feels like, etc…
while everybody else is living in tough conditions. And Scarlett,
again, made mistake and she, this time, lost her 3 most precious
diamonds – her adorable blue-eyed Bonnie in a horse accident, Melanie after a problematic pregnancy and Rhett Butler after Melanie’s
death. By the time she realized that Rhett was the person she always
looked for in her misty dreams, Rhett already gave up and left her
despite all her begging and apologies. Too bad for Scarlett and too sad
for Rhett. 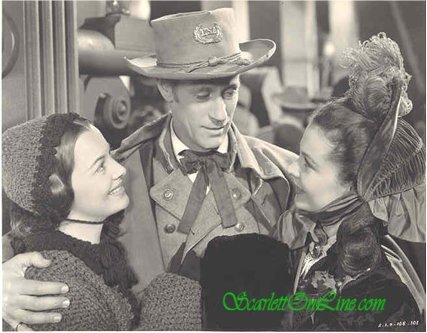 There is another interesting thing in “Gone with the winds” is about the relationship between Scarlett O’Hara
and Melanie Hamilton. Scarlett and Melanie are completely opposite in
characters but as a fate, they were always stick with each other. It
was exactly like what Melanie said in the very beginning when she came
to know about Scarlett: “If only we could be sisters”. To Scarlett, Melanie is the worst enemy of all since she stole the man whom Scarlett thought she was very much in love with – Ashley. Thanks to Scarlett’s decision of taking revenge on Ashley by marrying Melanie’s brother –
Charles Hamilton, they became sisters-in-law. Without Scarlett, Melanie
and her son should have died when the Yankees came to take over Atlanta
and even after that. Without Melanie, Scarlett could have also died
inside the criticism and isolation in the upper society whereby
everybody was so poor after the war. They protected each other for the
sake of living and loving one man –
Ashley. Scarlet and Melanie seems to have only contradiction yet they
still have the similarity which is the inner strength to survive and to
fight for what they live for. Melanie admired Scarlett for being so
lively and passionate, which she could never express after being
pressed in the high-class education for too long. Scarlett envied
Melanie for being so angelic and caring for other people and forgetting
about herself, which Scarlet could never do with her selfish character. 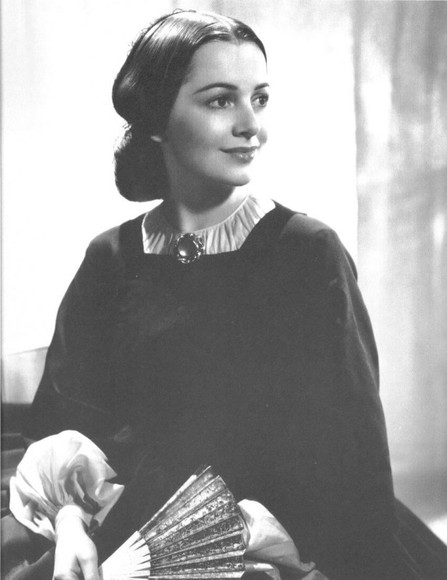 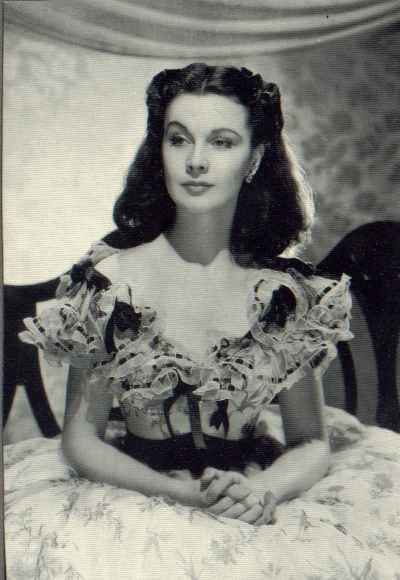 Another
thing to notice, Scarlett always stood by Ashley in his most critical
moments while Melanie appeared to motivate Rhett when he was down.
Their relationship was not simply sisterhood but it also tied other
people together. Two different worlds of characters seemed to mix up
and it made the story flow so exciting and unpredictable. Undeniably,
Scarlet loves Melanie because only Melanie adores and helps her no
matter what. And Melanie loves and even worships Scarlet for saving her
life, her son and even her husband with a better life. But love is only
recognized when they lost each other. The flow of the story reached the
peak point when all the relationships around Scarlett have become too
complicated and messy that she could not identify where to go. For her
success and fabulous lifestyle, that was such a high price to pay. 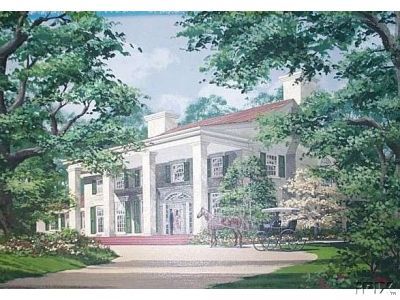 “Gone with the winds”
also taught us to appreciate our hometown as well, Evidently, Scarlett
recovered and became stronger physically, emotionally and spiritually.
The Irish-ness in her blood made her remember her hometown whenever she
got into troubles and need to hide somewhere to lick her wounds. Tara villa isn’t
a beautiful place but it kept Scarlett moving on even when her parents
both passed away. She felt the guts of keeping the house away from the
speculators even when she had to beg Rhett Butler in the prison to give
her some money to pay for the housing tax. Begging? That’s what Scarlett O’Hara
would never do in her life but she had to just to keep the house safe.
I admire her strong will of surviving and getting rich. She could even
kill a Yankee brat who wanted to break in and steal her properties and
surprisingly, Melanie – in a childlike body –
was helping her to bury the bastard and hide the murder. Killing
becomes a mean for surviving. And Scarlett plus Melanie had become a
lot tougher after this incident. They are both opponents and
complements for each other. If Scarlett and Melanie can combine into
only 1 person, she would be a perfect girl that nobody can beat.

“Gone with the winds”
has become an immortal novel with all of its characters sketching out a
picture of a complicated American society in nineteenth century with
all the classes, the wars (internal and external), the conflicts, the
characters, the glamour and a lot more. The opening ending keeps us all
guessing until now what would happen next to our lovely Scarlet O’Hara
and I guess nobody, yes, nobody can continue to write about it since
Scarlett, somehow, is Margaret Mitchell and vice versa, Margaret had
been living inside Scarlett, standing firmly in front of the winds.