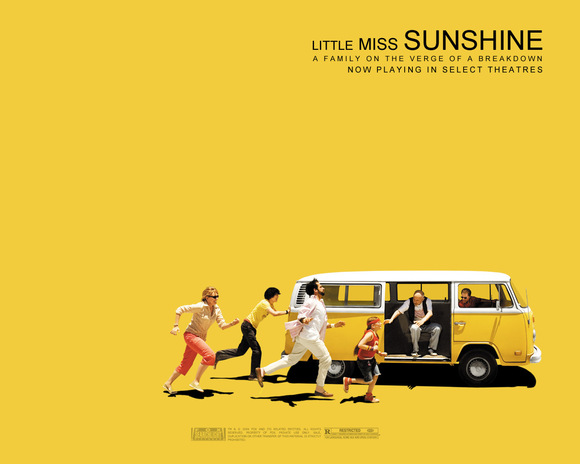 That was a hilarious and sweet movie, I believe after watching it with
my honey for the weekend. It’s totally for pure entertainment but the
movie brought out something to the viewers.

It’s about a
little girl living in a messy family which is on the verge of
collapsing. Well, her name’s Olive (what a cute name!) with a big belly
for consuming too much fast-food and ice-cream and a pair of weird
glasses. Her mother, Sheryl, is also kinda weird mom, typically with
always buying fried chicken back home and lying that she doesn’t smoke
while she does. Her dad, Richard, is also a weird man who always teach
the same old module of “How to be successful” and is proud of his total
nutty theory about “winner” and “loser”. Her older brother, Dwayne, who
always dreams to be a pilot, swore to be silent for already 9 months
and hates everyone. Her uncle, Frank, was a homosexual guy who tried to
commit suicide after being dumped by his “boyfriend”. Her grandpa is
quite a heroin sucker who always teaches her dirty dances (what a weird
grandpa!!!). In short, everyone is weird and crazy.

Olive is
quite an innocent girl. She sings, she dances, she goes crazy for
“Little Miss Sunshine Pageant”. She reached her pitch when she knew
that she was able to join the final round of Little Miss Sunshine
Pageant this year. Dancing around, collecting stuff for her trip, Olive
was like on her ninth cloud of happiness, forgetting to notice that her
trip actually made everybody go crazy with troubles and worries. Dad
and mom seemed not to find anything in common in arranging the trip to
make Olive’s dream come true. Finally, after almost torturing each
other, they agreed to get the Volkswagen yellowish mini-van so that
everybody can go together to California for the “Little Miss Sunshine
Pageant”.

The trip turned out to be a series of disasters that
we could never think of. My favourite part is when the van broke down
and everybody had to go down and push it so it could start again. Wah,
then it was like a team-marathon when Olive ran to jump on the van,
followed by Sheryl, Frank then Dwayne. It’s such an incredible work-out
for everyone. That “push and run to jump” scene became such so unusual
yet so regular during the entire movie. Everything started with the
“push and run to jump” scene.

I don’t want to tell you folks
about the details of the movie because that won’t be any more
interesting if you know it all. Surely, this movie will drive your mood
up and down with both laughters and tears. It made me realize one
thing, for better or for worse, a family is still a family. The members
got hooked to each other no matter what except when God takes anyone of
them home. And Olive’s family, which is the verge of collapsing when
everyone couldn’t speak with one voice, became so united just to learn
the value of efforts and team-working.

It made sense when
Olive didn’t win after presenting her grandpa’s immortal dance moves,
which shocked every one of the audiences and the judges. It made sense
when Dwayne found out he’s color-blind and can’t become a pilot. For
crying out loud, he talked. In fact, he screamed out of frustration and
anger. But thanks God, he spoke in the end despite his oath of keeping
silence for the rest of his life. It made sense when Frank found out
that there is nothing wrong with being a homosexual man. Who you are
doesn’t really matter. What you do will define who you are in others’
eyes. It made sense when Richard and Sheryl burst out in firing
argument about Richard’s stupid “winner-loser” theory and he finally
realized that he was a loser when he didn’t even recognize his
daughter’s best attempt trying to make her dream come true. And it made
sense when everybody re-united to support and cheer for Olive to dance
on stage. Better still, they went wild and jumped to dance on stage,
too. That might be crazy but I’d prefer to call it “Family spirit”. The
spirit kept the family glued with each other and it seemed to be the
last straw in the entire adventure which would drive everything back to
normal.

Olive didn’t win but to her messy family, she absolutely
is their “Little Miss Sunshine”. It’s not about winning, it’s about
breaking the rules and step over the barriers that always kept you from
doing what you really want and define who you are…

Just like its title, the movie really proved to be a must-watch during our weekend… I’ll give it a 9 out of 10.