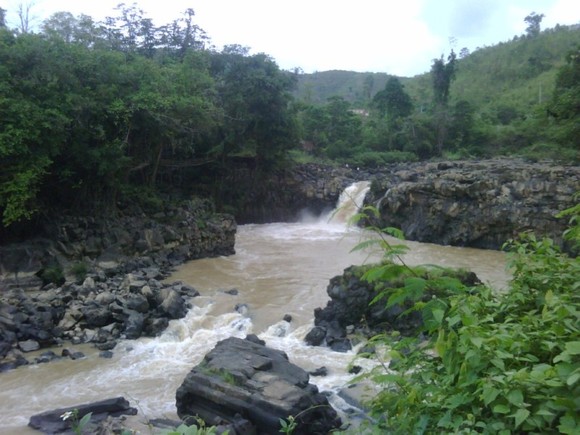 I just got back from the trip to the Buon Me Thuot highland. A very exciting, surprising trip with full of activities and definitely good food.

It started with Pika’s invitation to have a public holiday getaway, trying to escape from lots of stress at work and within the city. So, I said YES, no objection, no second thought, no monetary reconsideration. Everything was just a simple nod.

Pika was late for the bus. Fortunately, she didn’t miss it because there are a few more even coming later than she did. We met 2 guys, who are friends of Pika’s travel-mate. We chatted excitingly without any hesitation and we became friends just so naturally as the conversation flew along. After 30 minutes, we picked up the other 6 team members in Bien Hoa city. Again, naturally we became chatty friends even though I just met them for the very first time.

The trip was a little confusing because the coach driver seemed not too sure about the road he was taking. We took so many turns and stopped by so many times just to checked for the right direction. Pika and I shared a soft bench and we soon fell asleep after catching up with lots of things going on at work, friends, love life and God knows how many other perspectives. The tour guider, Mr. Ba, was a 30++ man with deep sexy voice and a sincere look, tanned skin and tall thin shape. He was talking in a very courteous and proper manner, which drove us to sleep even faster. However, I had to admit, he had quite a lot of cultural knowledge about this area even though he was not originated from it. Everything he said made me, or us, look forward to a marvellous, majestic, splendid and exploring trip to the highland.

But things were not always what we were hoping for. According to the plan, we were supposed to reach Dray Sap waterfalls 3pm but we did at 5 something. I became so weary and stressed because my eyes will go half-blind at about 6pm when it started getting dark. My eyes are naturally weak especially during moments of twilight and they can’t quickly respond or react towards things happening during this time. I hesitated but calmed down immediately when everybody became excited with cameras and trekking sandals. So, I cheered myself up, a bit reluctantly, and joined Pika and the crews walking down the stony staircase. It was moist and wet everywhere due to a heavy rain. To be honest, I didn’t like this kind of moist look of the place. But I kept walking down, kept looking further hoping to find a drier pathway to reach the waterfalls since I could hear its sound already.

Dear me, I was totally wrong. Dray Sap waterfalls was a super natural falls whose pathway was full of multi-shaped stones. They made my steps shaky whenever I tried to select the most stable stone to step on. I struggled, trying to calm myself down that I would definitely finished this waterfalls visit before it was getting dark. I succeeded. I reached the falls at almost 6pm, of course, turning to be a half-blind girl who was seeking a lot of help from Pika. We took a few photos but to my disappointment, Dray Sap waterfalls was not as majestic as I thought. It should have a bit more water or it was sue to the drought covering the entire region. But, seriously, in overall, it didn’t impress me at all, apart from its dangerous pathway, curving along the tropical forest. In the end, I really had to walk out holding Pika’s hand because I couldn’t see anything clearly. I turned out to be blind and the only good thing now is that I didn’t realise how incredibly dangerous the path was since it looked all smooth and grey (like blue-stoned street) to me. That’s what I called “Die without knowing and go straight to heaven still dreaming”.

I almost kneeled down and kissed the wet and dirty ground when I reached the end of the stair. I thanked God that I survived the pathway, seriously. The coach started going again and now we were supposed to arrive at White Horse Hotel for dinner (good Lord, please tell me the name of hotel was White Horse, again!). It was drizzling a little bit and I started feeling hungry. Mr. Ba told us that in Buon Me Thuot city, there were a lot of streets which ban the big coach from getting in. And you know what happened then, the coach driver struggled again to find the correct way to reach the place. We almost screamed out of happiness when we saw the hotel through the blurry glass window. And to our horror, we almost screamed again when we saw the light box carrying the name of the hotel. It was not White Horse, it was Heaven Horse. I couldn’t believe it. Heaven Horse??? Was it a joke? Or did Mr. Ba remembered the hotel’s name wrongly? Or was I too nauseated to read properly? No, it was really Heaven Horse. So where in the world is White Horse? And why in the world are there so many hotels with the names of Horses?

It turned out that we arrived at the wrong place. So all of us got seated in embarrassment and quietly waited for the right moments to come, just like primary-first pupils getting caught red-handed for chewing the candy without sharing to a friend. And after many other rounds of turning left and right, we finally arrived at White Horse hotel (sigh, Horse!) and quickly rushing in looking for the dinning table. No kidding, we were so hungry that we could eat a horse (pardon me? A horse again?). And we did show that we could eat a horse by finishing everything presented on the table without saying much. Horse-eaters!

We got sent to Eden hotel later on for checking in an hour later when everyone was full and satisfied with the stuffy dinner. The food was not bad at all. In fact, I am always easy-going with food so it seemed to be a fabulous dinner to my, by the way. Pika and I shared a room in the B2 (a.k.a. Basement level 2), a small room with just enough things for showering, sleeping, cooling down and entertaining. I quickly took shower and blow-dried my hair within just half an hour while Pika took more than an hour to do hers. The whole group planned to go out for a coffee as we heard people praising that the coffee here was the best, thick, sensational and super-fragrant in a very coffee way. And to our surprise, all the coffee shops here closed at 11pm while we got ready at 10:10pm. How pretty! We still didn’t give up, hopping in a coffee shop opposite to our hotel and order two specialty beverages of this land, coffee and avocado smoothy. It was quite chilling sipping the smoothy and enjoy the highland music and especially the sound of the night. People say the lake is tranquil while the mountain sings at night. I don’t know whether it’s true but I had a feeling that this highland is like a sleeping wolf, waiting to  be awaken. Well, when the wolf goes to sleep, we should keep quiet then. And we were back to the hotel shortly after that to get some snore for a new adventure the next day.