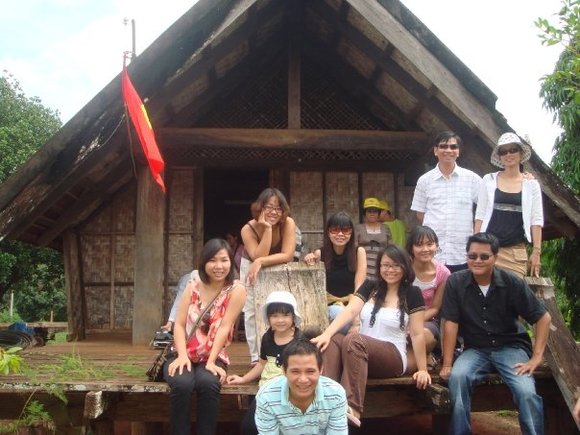 According to the plan, we visited Khai Doan pagoda but I decided not to step in. Pika and I quickly jumped out and bought bread with 2 packs full of snacks as if we had not taken snacks for a thousand years. Pika then joined the others in the pagoda while I was chewing the dry bread so hard and talking to the coach assistant about the history of the pagoda. We then departed to Don Village with the greatest excitement ever.

Don Village is a small lush green village, hiding in the middle of the forest and located next to a river flowing backward to Laos. This land was known for having generations of Masters of Elephant Hunters. The latest one is Master Amakong (I hope I got his name correctly), who is 97, married 3 times and still could make love enthusiastically at the age of 70++. Sorry for bringing this up but that was one of the most important part of the praise I heard of. The Village is popular with a rich culture presented by the minority ethnics there, who still live a lot on mother nature.

However, when I jumped down of the coach, it came to me that this village had been commercialised a lot already. A lot of souvenir outlets, worn-down restaurants and tourists walking hurriedly around. I didn’t care. Pika didn’t care. The whole group did not care either. All we wanted was to book for an elephant ride.

I couldn’t believe in the elephant we had chosen. It was a tallest male elephant, 30 years old (my gosh, older than me even) and pretty crazy at heart. Other elephants were walking graciously in the middle of the road while this one always bang the bush or trees so all the leaves would flung at our faces.

“Eeeeeehhh… Watch out the leaves! Get down! Arggghhhh!”

“Oh no there comes another one! Oh nooooooo….”

That was what everybody heard along the road when Pika and I were so busy pushing the leaves away and screaming our lungs off. And after leaves, we encountered electric wires. Don’t forget this is a rural village and the elephant was super tall (double the height of a medium van). And there were so many wires which made us get up and down like 2 mad girls wrestling on top of an elephant. Seriously, after 15 minutes riding this crazy elephant, we were sweating like hell as if we had just completed a Pilate section. But out of this, we were able to make 3 super-short video clips about us screaming, which was deleted by accident when Huy was a bit drunk after sipping highland specialty rice wine (Huy, you should know this is the biggest crime ever you have committed!).

We then visited Master Amakong in his daughter’s huge wooden tent. From afar, we already saw his head tucked out of the small window looking at us expectedly. All guys were the most excited when meeting him. They took his pictures, talked to him, basically and primarily about how he could maintain such fantastic love life at the age of a 70-plus grandpa. He got a secretive herbal beverage, which helped him to sustain his energy, and his daughter sold a pack of herbs at VND100,000. I bet he made good profit from these herbal packs besides hunting and training elephants.

Oh wait a second, I am missing the part we were going on dangling bridges. Below was the noisy red river which carries a lot of natural fertiliser to every land it passes through. And our group turned to be a bunch of monkeys with unforgettable poses: hugging trees, dangling along the swinging bridges, etc… And until now I have not seen the “beautiful” photos taken of those moments and Pika should be responsible for this serious problem.

Buon Me Thuot night was a little bit chilling, dazzling with thousands of stars. The shops still closed very early as usual. We were supposed to have a cultural fire night with mountain girls and guys dancing ethnically and playing some sort of strange music instruments. To our surprise, there was no outdoor fire night but in-house one with all the old mountain men and a bunch of city-looking girls dressed in minority ethnic outfits. The experience was pretty much like seeing a concert, a very short and simple concert. I decided to walk back to Eden hotel to take shower. When I returned, my travel-mates already enjoyed the mountain rice wine. Huy turned red, Pika turned overwhelmed and the rest turned sleepy. It was time we enjoyed the highland coffee specialty. So based on my colleague’s recommendation, 9 of us squeezed in a 7-seat cab and strolled to Vi Dang café (direct translation: Bitter Flavour café). It was quite a nice place but over-crowded by the time we reached. But still, coffee (and other beverages) came first and we just didn’t care anymore.

I don’t have much time to write all my feeling down for the highland coffee. I think I will put it in another separate article. Treat it with favour and priority, baby! Back to the night, as I mentioned earlier, Huy has committed his biggest crime ever by turning Pika teary with his drunkenness. He accidentally deleted the elephant-riding clips Pika had spent so much efforts on. I couldn’t imagine if I was in Pika’s shoes, I’ve gotta have killed Huy for centuries already. Until getting back to the room, Pika was still upset over the deleted clips. I hope she wouldn’t get upset again when reading this. Or Huy, you’d better watch out your life, man!